When Chris Ferrell moved to Bluff Park, the avid runner found it difficult to find spots to run.

“The roads here can be tricky to an outsider,” he says.  “Through trial and error, I have found a few routes that work for me.  I see other people out running and they seem to have routes and friends to run with.  I’ve noticed seasoned runners who meet early in the church parking lot like they’ve been running Bluff Park for years.”

This gave Chris an idea to tap into the running community of Bluff Park so he created the Facebook Group Bluff Park Runners and Walkers .  “My hope is that the group would provide a platform for people to connect, encourage, and promote running/walking in our neighborhood.”

With groups for just about everything on Facebook, Chip has a few goals for the newly created group.  “I really want to encourage people to connect and develop running/walking groups with others that are on similar levels.  It’s not easy to get started.  Getting out there can be intimidating, and it helps to have someone else to stay motivated.”

Another idea for the group is to establish “water stops.”  It’s really hot out there, and Chris says you would be surprised at how that affects people’s decision to go out for a run. 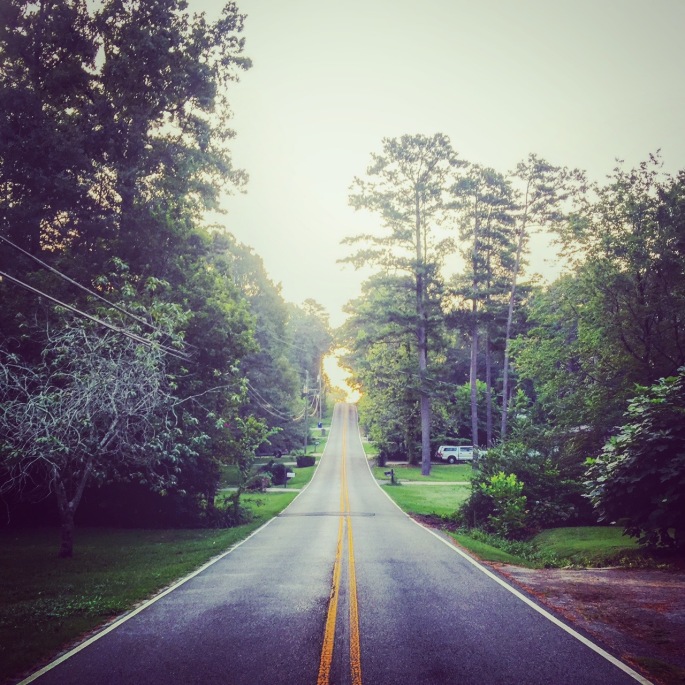 A “water stop” is a simple cooler filled with cold water.  Ideally, it would have disposable cups and a trash bag next to it.  “Water stops are usually spaced two to three miles apart.  People volunteer to fill them up before runs and clean up afterwards.  It works on a rotating schedule, usually located at churches or frequently used intersections,” Chris says.

Chris has been running since 2012…after a girl.  “Through mutual friends, I met a girl who mentioned that she was a runner and would like to hang out sometime.  I knew I better start running just in case hanging out meant running with her.  I ended up falling in love with running and the girl, who is now my wife.

“I love the secluded, safe feel in Bluff Park.  I live close to the Park Avenue sidewalk, so I primarily start there and run the roads that branch off of it.  I also make it down to Moss Rock and run the trails sometimes.”

Bluff Park Runners and Walkers is a group for everyone interested in running or who take walks in the area.  No experience nessasary!  Chris started out with juat a mile or two at a time and worked up to his first 5k.  “I started running at Lakeshore Trail, I would just set small goals for myself to get a little better every time.  I registered for a few 5k’s and bought a good pair of shoes.  One day, I saw a sign that said “Get Off the Road.”  It was promoting The Southeastern trail running series that started with a 5k and over seven months advanced to a 50k (31 miles).  I took the leap and registered for the 5k.  I really surprised myself and after each run, I trained for the next.  I met new people and learned more about hydration, training and group runs.  Sevem months later, I completed my first 50k,” he recalls.

Heather Jones Skaggs is a Hoover, Alabama writer for multiple publications and BluffparkAL. Heather is also the author of three books from Arcadia Publishing and The History Press. View all posts by Heather's Corner