“Growing up in scouts, we have always learned how to treat the flag respectfully, and I wanted to pass on something longlasting that would be useful to the community as my Eagle Project.”

Meet Joseph Carter.  He is the Bluff Park scout behind a new collection system in Hoover to retire old U.S. flags.  Read more from Joseph and the system he designed to provide a way for citizens to turn in flags that need to be properly and honorably retired.

Q: Joseph, why did you choose this for your Eagle Scout project?

“I was looking for ideas for projects and my mom mentioned that she had seen some recent posts on Facebook about people in the community not knowing where to leave their flags for proper disposal.  The idea sort of evolved from there. I did some research and found out that there didn’t seem to be anything installed outside in a public area that could easily be used by the public to safely dispose of the flags.  In fact, it had been our experience at the troop hut that people would often leave garbage bags with flags hanging exposed by the hut. We continue to monitor a drop box at bluff park hardware, but it is inside and must be used during business hours.  So the idea came about to make something that would house the flags safely until they could be collected and properly retired.”

“I learned how to make a scale drawing and was able to estimate materials from that.  I also made a scale model which helped me pitch my idea to the Eagle Board and help them understand what I was wanting to do.”

“Before scheduling the first big work day, I had to make sure my design ideas would work so I built a prototype box with the help of my family from the plans I had drawn.”

“I realized some errors in my measurements and estimations and was able to correct them prior to the big work day.  In all, there were 342.5 work hours involved in my project! But that involved planning, meetings, emails, actual work, organization, installation and time involved in the paperwork required.”

“I designed the flag boxes with a patriotic theme to promote patriotism but also to make them recognizable as being different from a mail drop box or used clothing collection box, etc.  I tried to pick a size that would allow for the collection of flags of all sizes, and to be big enough to be easily recognized – like a piece of art. So the outward appearance was very important to me.” 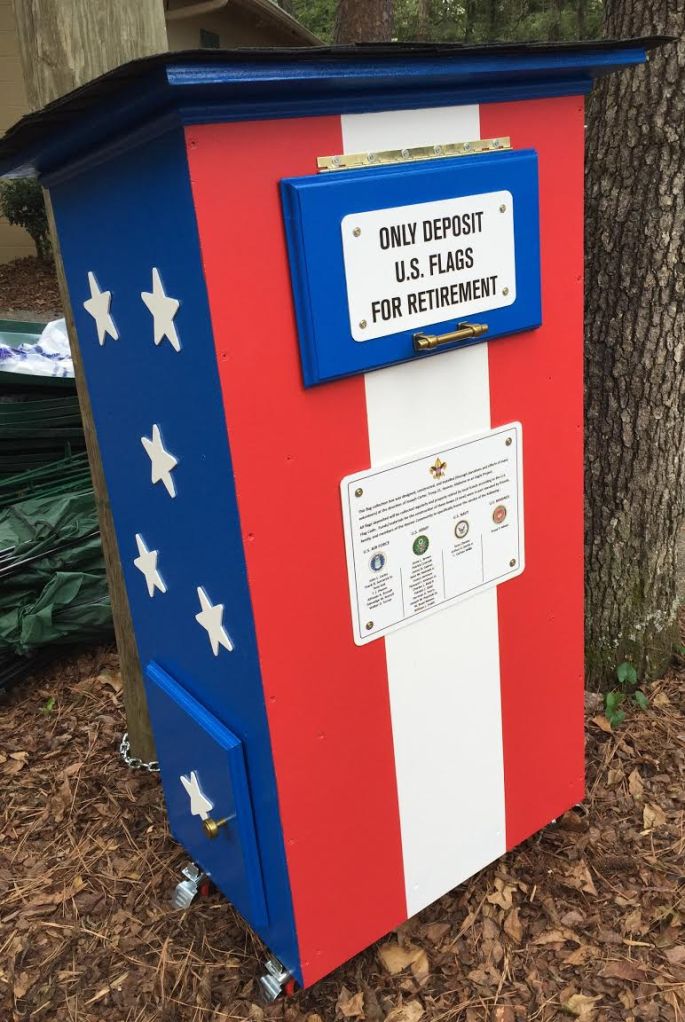 “I selected the locations to give exposure to different areas – the Shades Cliff Park in Bluff Park by my troop hut, Prince of Peace on Preserve Parkway, and Alabama Veterans Memorial Park.”

Over 60 flags have been collected so far.

Q: Now that the project is complete, what happens?

“I created a responsibility for the Historian (a position that rotates responsibility every six months) at my troop to collect the flags and see that they are taken into inventory for proper disposal.  I am also willing to work with other troops that may want to monitor either the box at Prince of Peace or at the Alabama Veterans Memorial, but for now, my troop will take care of all of them. I am the Historian for the next six months, so I hope to track the progress and see how many flags we take in.  The three boxes I installed completed my own Eagle Project, but hopefully, this may start something that others want to continue. The first weekend the boxes were out there were four left in the box at the Bluff Park Art Show at Shades Cliff Park. As part of my research, I saw where over 125 flags were collected at one of the Hoover Hazardous Waste collection days.  So I know there may likely be a lot out there that need to be retired properly. My troop regularly conducts flag retirement ceremonies on overnight campouts when there is no fire ban.”

The U.S. Flag code states that, “the flag, when it is in such condition that it is no longer a fitting emblem for display, should be destroyed in a dignified way, preferably by burning.”

The Boy Scouts generally follow the U.S. Flag Code.  Materials used in the construction of the flag can vary greatly and some of the materials can be fairly hazardous to burn.  In all cases, disposal is done in a respectful ceremony. Although the exact steps to follow are not clearly defined in the code, generally Troop 21 cuts the flag into smaller sections and the pieces are burned in a respectful ceremony by the troop scouts (when not extremely flammable materials – then it is handled by adult leaders).  Troop 21 conducted a public flag ceremony at their 100th year celebration.

The flag can be flown every day, but it is often flown to show patriotism on these observances:

When displaying the flag…

Keep your flag completely dry and folded properly – into a triangle, with the union (blue section) visible – before storing it in a well-ventilated area.  If the flag is damaged or worn out, it should be disposed of with dignity.

The flag should not touch anything below it or rest on the ground.

Joseph is the son of Roger and Georgeann Carter and is a lifelong resident of Bluff Park attending Bluff Park Elementary, Simmons Middle School and currently enrolled as a Junior at Hoover High School.  Joseph is a scout with Troop 21 and earned his Arrow of Light with Pack 321

Heather Jones Skaggs is a Hoover, Alabama writer for multiple publications and BluffparkAL. Heather is also the author of three books from Arcadia Publishing and The History Press. View all posts by Heather's Corner